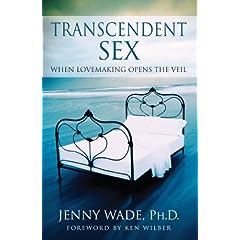 Today's entry has been so overused by woos, it's lost all meaning for me. Well, just about. Transcendence is supposed to relate to going above or beyond something, like previous limitations. Woos love to use it like "transcending to a higher plane" or stuff like that. I wouldn't be against having smart people move up in the world, but I don't think that's quite what they mean, if they mean anything at all.

Often, that 'higher plane' will be described as above the material or scientific world, which kind of ends up in a contradiction: If it can do stuff, it'd pretty much going to be included in materialism and be explored by the scientific method. In short, it seems they're claiming to transcend truth. Escapism's fun, but it's not supposed to be a way of life.

On another front that's more often vitriolic, I bump into my share of fundies who claim that atheism/evolution/gravity/whatever doesn't provide "transcendent" morals to follow, which is why us evilutionists go around eating babies and kicking puppies when no one's looking. Aside from crazy non-sequiturs worthy of a couple more doggerel entries, just what is this supposed to mean? How are "transcendent" morals any different than the usual humanist/secular/whatever values nearly all the skeptics I know go by? The differences I'm usually told about go down several very twisted avenues, including textbook examples of "might makes right" or outright moment-by-moment moral relativism. Bizarrely, the people who practice these depraved ethical theories have the gall to assign their values to us and claim that they're "lowly," "empty," or whatever qualifies as "non-transcendent."

So, fair warning to woos: If you say "transcendent," I'm going to look at you as if you said "flarschnikit."

"Transcendent" bugs me in the same was as "enlightenment" and "mind expanding drugs" do. Everybody wants to feel like they're on a higher, better "level" than the average joe is, and its their attachment to that notion that creates the illusion of its truth more than anything.

On the other hand, I think "transcendent" is probably the right adjective to apply for really good sex, so there's a tiny grain of truth in that book title, at least. ;)

Turns out it's not just newage woo-woos who are getting in on the conspiracy to render the word meaningless.

Poor word. What did it ever do to anybody?