Sorry to regular readers. I have been extremely busy with my band LABELED and have not had any updates. For fun though, check this idiot out. I guess he lost the million dollar challenge?
Posted by Ryan Michael at 10:50 AM 5 comments:

Where do You Draw the Line?

This is my question to all the true believers out there:

Where do you draw the line? Why do you believe in some silly things and not others?
To quote the Two Percent Company:

Where do you draw the line? Why does one believe ghosts walk among us even though there is not a shred of evidence, but scoff at the idea of Ass Gnomes? Why do you believe the creation account written in the Bible, but laugh when Tom Cruise points out the history of the world according to Scientology? Please tell me, I'm dying to know. You can e-mail me, call me, send smoke signals, whatever.

Just like the folks at 2%, I choose not to believe in these things. It is stupid to say "I know for a fact there is no god". Conversely, I can say "I do not believe there is a god because there is no proof and Occam's Razor suggests he/she/invisible pink unicorn is not necessary."

Do you think you can make the same statement regarding Ass Gnomes? I'm sure you do. Why are other paranormal claims any different?
Posted by Ryan Michael at 2:50 PM 4 comments:

Everyone, please visit the 12th Skeptic's Circle here. No offense to the previous hosts, but this is my personal favorite. Brent did such an awesome job!
Posted by Ryan Michael at 10:37 AM No comments:

After reading his completely moronic article on the recent collapse of one of Australia's most famous geologic formations, I see Dr Tas Walker (the book of Genesis forbids periods after abbreviations) received his PhD from Kellogg's Cornflakes University by sending in enough UPC symbols. One of the "Twelve Apostles", a set of limestone rock stacks off the Port Campbell Coast and formerly known as the "Piglets", crumbled to the ground on July 3rd, 2005. Now the Creationist Crazies are using this as evidence for young Earth erosion.

First, Dr Tas Walker (apart from having a real cool name) holds a PhD in engineering and not geology. Second, coastal limestone rock formations are known to be geologically unstable. Lastly, this is an excellent time to illustrate the logical fallacies of shoehorning and selective thinking.

Here it is after the collapse:

"We are told that The Apostles started to form up to 20 million years ago when erosion gradually attacked the limestone cliffs of Port Campbell. No wonder everyone is surprised when one collapses."

I'm not surprised. Rock stacks and arch formations are geologically proven to be inept in avoiding erosion. Here comes the science. Throw in the fact that limestone is one of the most soluble of all sedimentary rocks and one would think Dr Walker would be surprised it hadn't collapsed yet. The Southern Ocean is known to have strong winds and high waves, which serve to quickly damage the southern coast of Australia. Face it, this stack was on it's last legs.

This does not stop the Creation movement from using this example to prove erosion does not take millions of years. They are forgetting the fact that these formations went through a process that was referenced above. First, the masses were formed by sediment and biomass. After a time, a cave was formed, followed by an arch. The arch caved in and formed the stack. This process is even documented in the Creationist article! Says Walker:

"But there was a similar collapse in 1990 when London Bridge, a natural rock arch to one of the stacks, gave way not long after people walked over it. Two people had to be rescued by helicopter. "

Yes, a process which took millions of years. It was going fine until some jackass walked on it. Now, if that stack collapses next week, it might do more for their argument. As it is, I would bet my whole collection of Thundercats action figures the London Bridge stacks have a while to live. Or maybe the Answers in Genesis people are suggesting people have to walk over land masses Paul Bunyun style to cause erosion? I don't follow their logic. Probably because logic is Kreationist Kryptonite...

Quoth the good Dr "...These eroding Apostles have a similar message to the original Apostles of Jesus’ time, one concerned with the authority and reliability of God’s Word. This world is young, just as the Bible records."
To quote two of my favorite bloggers: Bwahahahaha!!
I get it. Since we can see one example of erosion in our lifetime, that means that it occurs quickly. Strange that we can't see Grand Canyons being made, and strange that glaciers are not moving faster, slicing through terrain. This is a perfect example of selective thinking: finding something that supports your position and ignoring the rest of the evidence.
This phenomena is expected and predicted by science. Scientists make a theory and test it. Creationists wait for something to happen, then shoehorn it into their religious beliefs.

Thanks for playing Dr Tas. Try again.
Posted by Ryan Michael at 9:02 AM No comments:

I've been waiting to comment on the cult of Scientology, and after reading the uneducated, moronic comments the famous followers of Elron have been making lately, I felt the time was right. Thus begins the thesis: Scientology is bullshit. The most important factor to look into is the comments that have pissed me off, and why it's dangerous for celebrities to spout this nonsense. Then it's time to debunk them. Finally, a look into what Scientology is - a cult based on the yammering of a 3rd rate sci-fi novelist, Mr. L. Ron Hubbard.

I'll quote articles here and here that have some quotes from the celebridiots. The first is "You don't know the history of psychiatry. I do," by the great psychiatry history professor Tom Cruise, pictured here getting a zit popped by The One that Got Away. 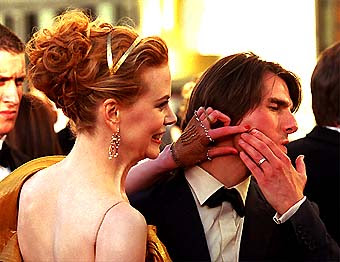 Now the poor guy's nuts and has to date herpes infested Bat-man hookers.

But I digress. Here is what Scientology has to say about psychiatry. This is such a bunch of woo-woo drivel. I don't even know where to start. How about here:

Convinced that man is only a body, psychology and psychiatry have forwarded the idea that there is no soul, merely a physical brain, an aggregation of tissue and nerve cells.

Wow. I looked all over for some evidence that the human body is anything more than "merely a physical brain, an aggregation of tissue and nerve cells" but couldn't find any. All I can find are some dopey saps who can not accept the fact that we are just animals. Listen people - you are not fucking special just because you are bipedal, have opposable thumbs, and can shit in a toilet. There's always something about "transcendentalism" or "energy" that these people expatiate. They never can provide any evidence.

The Disciples of Elron believe that vitamins and excercise can cure depression. So vitamins heal the soul...? I thought those Chicken Soup books did.

...the array of primitive methods dreamed up by “modern” psychiatrists includes hypnotic drugs, lobotomies, electric shock and bolts to the brain while a person is drugged and comatose — each of which leaves a person little more than a vegetable.

These people have watched One Flew Over the Cuckoo's Nest a few too many times. For Elron's sake, lobotomies are NO LONGER PERFORMED. We know that psychiatry is an evolving science, and there have been quacks along the way. It may even be the one medicinal science most suceptible to the placebo effect. But for Elron's crew to suggest that there is an accredited, moral psychiatrist that does not try cognitive therapy prior to drugs or shock therapy is just brainless.

For those who don't know, "advanced" Scientologists believe that an alien warrior named Xenu came to Earth 75 million years ago when he was about to be deposed as ruler of some galactic federation. He used psychiatrists to drug the inhabitants of Earth, and then killed nearly all of our planet's population. I swear I am not making this up. Xenu then made all of the souls he collected from the dead people watch movies, which implanted fake memories of the past, including all world religions. After this, there were just a few bodies left, so the souls crammed themselves into the few remaining living bodies. These people begat us. The moral of the story is: unless you are a Scientologist, you still have the Xenu movie influence of the thousands of people killed. This is the "history of psychiatry" Cruise believes in. Let me reiterate: THIS IS WHAT TOM CRUISE BELIEVES THE HISTORY OF PSYCHIATRY IS. What...a bunch...of shit...

Our next quote de quackery comes from Kelly Preston, best known for being John Travolta's piece of ass. Seen here with her husband wearing their Anti - Xenu helmets.

We've all heard Tom Cruise stating Brooke Shields is wrong for having used anti-depressants, as she discussed in her book. Barbarino's hole had this to say regarding Ms. Shields choice:

"If you're going to be advocating drugs, which she does in her book, you need to be responsible for also telling the people of the potential risks."

Yes jackass, and if you are going to support pseudo-scientific treatment in favor of proven treatment then BACK IT UP!! Show some evidence as to why we need to become level 75 warrior-mage Scientologists to cure our souls.

The problem is, they can't. They have to revert to Dianetics, the crappy sci-fi novel (both by Elron), or "just try it". Sounds like some other folks I know...

There is a reason the skeptical blogging community points out this silliness. These celebridiots are very persuasive, as it is part of their job. The easily swayed among us may be duped into using "alternative" therapies instead of seeking real treatment.

Q: Remember what one calls alternative medicine that works?