We're here today with Michael Behe, one of the leading propeller heads of the Church of the Butt Propeller.

Woah! The theory of intelligent design is not a religiously based idea, even though devout people opposed to the teaching of evolution cite it in their arguments.

First, ID isn't a theory. It's unfalsifiable, and therefore untestable. It's not even a hypothesis because of that. Second, it's kind of hard to ignore the religious motivations. Judge Jones sure found a lot of that in the school boards.

The contemporary argument for intelligent design is based on physical evidence and a straightforward application of logic. The argument for it consists of four linked claims. The first claim is uncontroversial: we can often recognize the effects of design in nature.

I don't recognize any "effects of design" in nature. Everything I've ever observed can be explained by evolution and other naturalistic theories.

For example, unintelligent physical forces like plate tectonics and erosion seem quite sufficient to account for the origin of the Rocky Mountains. Yet they are not enough to explain Mount Rushmore.

True, but there's nothing in nature like Mount Rushmore: We know who designed it, how it was designed, and why it was designed. We have all the evidence behind the planning, building, and stated purposes. Life, however, was most likely "designed" by unintelligent evolution. We've been able to successfully apply evolution's principles for "designing" things for us, and it only takes a little speculation to come up with testable hypotheses about how particular features evolved. And even if we can't immediately think of a way something evolved, that doesn't mean it's impossible for evolution to account for it. All that first claim of yours is that some things "look" designed, but science is about going beyond first impressions.

Of course, we know who is responsible for Mount Rushmore, but even someone who had never heard of the monument could recognize it as designed!

Not really. If an alien beamed down to Earth, having never seen a human, he might think it's just erosion somehow leaving a bunch of strangely smooth surfaces. I think you're letting your prior knowledge of the human designers get in the way of your objectivity.

*Rolls eyes* Which leads to the second claim of the intelligent design argument: the physical marks of design are visible in aspects of biology. This is uncontroversial, too. The 18th-century clergyman William Paley likened living things to a watch, arguing that the workings of both point to intelligent design.

But that's a false analogy. Watches don't reproduce, like life does. Life can pass on traits and features that work, as well as build new ones through mutation and all those other genetic tricks.

For example, Francis Crick, co-discoverer of the structure of DNA, once wrote that biologists must constantly remind themselves that what they see was not designed but evolved. Imagine a scientist repeating through clenched teeth: "It wasn't really designed. Not really."

How I mine for quotes? Just because some humans have the apophenia to see design doesn't mean it was designed. Science is about looking beyond first impressions, remember? If we stuck with first impressions, we'd all be hiding from Zeus and his magic thunderbolts of lightning, very, very frightning.

The resemblance of parts of life to engineered mechanisms like a watch is enormously stronger than what Reverend Paley imagined. In the past 50 years modern science has shown that the cell, the very foundation of life, is run by machines made of molecules. There are little molecular trucks in the cell to ferry supplies, little outboard motors to push a cell through liquid.

The next claim in the argument for design is that we have no good explanation for the foundation of life that doesn't involve intelligence.

Hel-lo-o! Abiogenesis. We've been able to create conditions where amino acids and such show up spontaneously. We may not have pegged down the Earth's initial conditions, but it's apparently far easier than you give credit.

Darwinists assert that their theory can explain the appearance of design in life as the result of random mutation and natural selection acting over immense stretches of time. Some scientists, however, think the Darwinists' confidence is unjustified. They note that although natural selection can explain some aspects of biology, there are no research studies indicating that Darwinian processes can make molecular machines of the complexity we find in the cell.

First, I imagine there are a lot more scientists out there named Steve would disagree. Second, just because your imagination isn't as good as theirs is no reason to give up and say "godoopsImeanthedesignerdidit."

Scientists skeptical of Darwinian claims include many who have no truck with ideas of intelligent design, like those who advocate an idea called complexity theory, which envisions life self-organizing in roughly the same way that a hurricane does, and ones who think organisms in some sense can design themselves.

The fourth claim in the design argument is also controversial: in the absence of any convincing non-design explanation, we are justified in thinking that real intelligent design was involved in life.

There's no real controversy behind that claim: It's an argument from ignorance, and a call for surrender. You can't make an assertion based on lack of evidence. Thunderbolts of lightning, very, very frightning again.

There you go on again about appearances. If there is a designer out there, I thank him for not making you go into medicine.

The strong appearance of design allows a disarmingly simple argument: if it looks, walks and quacks like a duck, then, absent compelling evidence to the contrary, we have warrant to conclude it's a duck. Design should not be overlooked simply because it's so obvious.

Then don't use its "obviousness" as evidence. Make a testable hypothesis and *gasp* test it!

Still, some critics claim that science by definition can't accept design, while others argue that science should keep looking for another explanation in case one is out there.

Oh, no! Straw Dog! Why! Why'd he knock you down so shortly after creating you?! The problem isn't with design, it's with you openly advocating laziness as the process to reach it. The reason we search for other explanations is because they have promise. Until you can come up with a way to test for design other than "it looks designed," ID shows no promise whatsoever.

But we can't settle questions about reality with definitions, nor does it seem useful to search relentlessly for a non-design explanation of Mount Rushmore.

For the former: Exactly, we can't redefine science to include "laziness" as a legitimate research technique. For the latter: You're right, because we have very strong evidence about the design of Mount Rushmore. Unless someone has an alternate explanation with even stronger evidence, we shouldn't waste time. Intelligent Design, however, is still at zero evidence. Until you can gather evidence beyond appearances generated by your lack of imagination, ID should not be bothered with.

Besides, whatever special restrictions scientists adopt for themselves don't bind the public, which polls show, overwhelmingly, and sensibly, thinks that life was designed. And so do many scientists who see roles for both the messiness of evolution and the elegance of design.

Just because the public is allowed to be lazy, doesn't mean that ID should be given any consideration. Personally, I'd like to remove laziness from the public with science education. Also... "many scientists?" Who? As for the "messiness" of evolution, well, that's opinion. I see evolution as very elegant, since it doesn't require the constant attention of anyone. I think it's time to end this interview, since you're spinning around in circles... with a radius of zero. 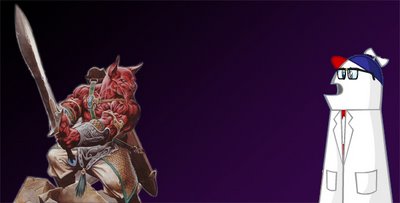 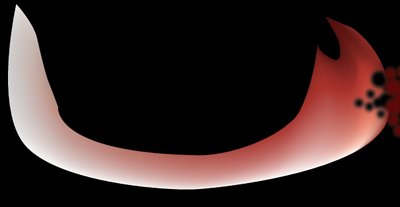 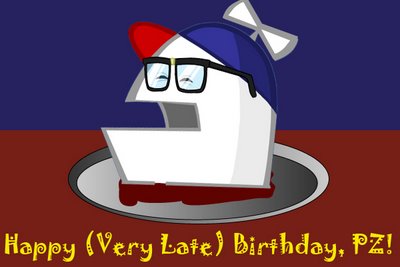 I told you I'd get you Behe's head on a silver platter. Sorry it took so long.
Special thanks to Skeptico for showing me some juicy gems of Behe's anti-wisdom.
Posted by Bronze Dog at 7:54 PM

That is an extremely accurate depiction of what "debating" pseudo-scientists is like - they put their fingers in their ears and keep right on truckin'.

I've hear Behehehe on the radio, you impression of him actually makes him look better than he is in real life...
/Snark