In the Dog House #3: Virtual Reality 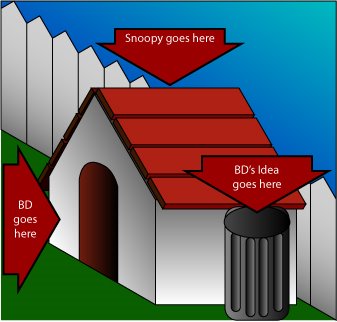 Some of you may remember I did a little post about one of Nintendo's greatest failures, the Virtual Boy. You may want to read that post first if you haven't already. Much of what I typed there will apply here.

When I was younger and virtual reality was brand-spanking new, promising to be the next big thing in entertainment, it was very cool. There were all sorts of promises both explicit and implicit about new levels of gameplay immersion. Heck, sometimes is was so over the top, cartoons and such treated it as if sticking on a VR headset sucked your mind into cyberspace. I found myself screaming, essentially, "VR DOES NOT WORK THAT WAY!"

I didn't think all that much about VR since those days, except for when I dug up my Virtual Boy during some closet cleaning. Then I saw a commercial for Beyond Tomorrow featuring a VR set that involved a big hamster ball the player would run in. That's when an extra level of crap about VR hit me: The concept has been around for what, two decades? And they still haven't established themselves with some common brand name everyday headset? Yeah, it's cool that they've got some big device out there that gives a player a feeling of mobility to go with depth perception and a little mocap. But unless I'm going to head over to whatever techhead paradise it's set up at, that's kind of pointless. Where's the VR for the common man?

That's what these geniuses should be working on: Getting the baseline immersion to be commonplace. I know a fair share of games where having binocular depth perception would make a lot of jumps easier to judge. Even if I'm still holding a gamepad, that would be a big improvement. So why aren't they making that cheap instead of making big motion sensitive hamster balls? Shouldn't we be moving beyond the overengineered concept phase by now and at least into "It costs $1,000 dollars now, but they'll be in mass production with a price plummet next year"?

To be honest, I think the Virtual Boy may have killed off a lot of possibilities there, particularly with regards to headsets. A lot of the problems with the VB - lack of social gaming, headaches - would still be hard to overcome with any other type of headset, however much better it might be. I know we have the technology now to make a lightweight headset with a separate, fully-colored screen for each eye, but that doesn't get around the other problems inherent in the technology.

One suggestion I left for the alternate Virtual Boy was some kind of TV link to show others what they were seeing, which could help the social aspect.

Don't know what could be done about headaches, though. I never experienced one, personally.

3D imagining has been available, and cheap, for the PC for ages - it just hasn't caught on outside the flightsim community. Sure, you need a monitor with a pretty good refresh rate, but it's not like the tech isn't there. You can pick up a set of LCD shutter glasses for about 10 bucks on eBay.

From my own experiments with it, I think the reason that it hasn't caught on is simply that most games aren't properly designed to work with it. Shame, because it does actually work pretty well.

Then there's head tracking - another VR technology that's been around for ages, but has only been picked up by the flight-simmers...

I'm definitely outside the flight sim community, so I guess that might be why I haven't heard much about this.

There was an article on Tomshardware about how to configure Far Cry to work with one of those sets of glasses that Dunc mentioned and a projector.

According to the author, it really did make spatial perfection much more effective, but the setup was expensive (not like the hamster ball, but still expensive) and riddled with problems and software bugs.

So, indeed, not for the average Joe; but the idea was certainly intriguing.