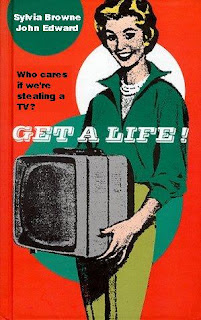 Imagine a person is on trial for performing a scam. The prosecution has presented a pile of evidence and explained how the scam works. After that, the defense jumps up and shouts, "Get a life! The defense rests."

Now imagine that a news program covers the death of a person due to a medical treatment that was never proven effective. They probe into the organizations promoting it, but get the runaround instead of evidence that they actually bothered to test it. Imagine someone jumping up and shouting at the news anchor, "Get a life!"

Psychics, quacks, and so forth have been unable to prove the value behind their alleged services. A doctor's services can be verified because they can perform double-blind control studies to determine if there was an effect from the treatments being used, as well as a number of measurable indicators in individual patients. An investigator's services can be validated by the evidence and the results he collects.

Psychics and quacks, however, are given special exceptions: If they're right, they're right because of their psychic power, no other explanation entertained, but if they're wrong, their claims are re-re-re-interpreted until they might no longer be a failure. We just want woos to play by the same rules as the rest of the professions out there.

Besides, even if we are obsessed to the detriment of our social lives, does that make anything we say less true?

Doggerel Index
Posted by Bronze Dog at 8:43 AM

"Get a life" seems to be the fall back position for someone who doesn't care about a topic as much as the "enthusiastic person" does. Like trekkies vs William Shatner. If used by a woo against a skeptic, though, they're probably trying to give the impression that what the skeptic is arguing about is useless fluff. I would hope that any observers to such a conversation would recognize "get a life" as the sign of desperation that it is.

I love it, Bronze Dog! As if one who takes the time to warn others of a quack doesn't have a life!