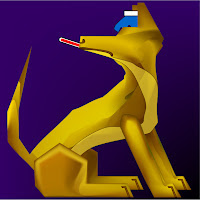 Wes apparently liked my use of "random" in my description of Creationism, and I got to thinking in the shower. Imagine you roll a die several times and it consistently comes up six. Three conjectures come to mind:

The second idea is a null hypothesis. It predicts that there's a 5/6 chance you won't roll a six again. Technically, this one can explain any result, but each roll of a six makes it less and less likely to be true.

The third idea is unfalsifiable, since we can't make predictions from it. If you roll a six, you can say the magic man's in the same mood. If you roll a five, you could just as easily say he changed into a five-ish mood for that moment. Same with the other numbers.

I guess it shouldn't be hard to guess that #1 is pretty much every scientific theory ever and #3 is what Creationism boils down to: It's actually less predictive than randomness.

Thinking in the shower: The poor man's meditating under a waterfall.