Nope, not incoherent hate mail like PZ so often gets and posts with that title. It's a Washington Post article on quackery someone was kind enough to send me.

It starts off with bad news:

More than one-third of U.S. adults and nearly 12 percent of children use alternatives to traditional medicine, according to a large federal survey released today that documents how entrenched acupuncture, herbal remedies and other once-exotic therapies have become.

I'd like to hear more about NCCAM testing the remedies, rather than surveying their popularity. That's what they're supposed to be there for, right? ...I don't recall ever hearing much of that, though, aside from some negative studies that don't ever do anything for policy.

The most commonly used are dietary supplements and herbal products such as echinacea, flax seed oil and ginseng, followed by deep breathing exercises, meditation, chiropractors, massage and yoga. While fewer Americans were using certain diets and trying herbal remedies such as echinacea to cure colds, the popularity of acupuncture, meditation, yoga and massage all grew.

Those of you who watched my second YouTube video may have seen a little image of mine: 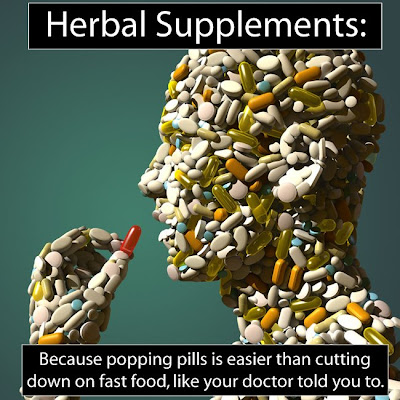 "I think it's fair to say we can conclude that this is part of the steady state of medical care in the United States," said David Eisenberg, director of the Harvard Medical School division for research and education in complementary and integrative medical therapies. "I think the news is complementary and alternative medicine use by the U.S. public is here to stay."

Others said the findings were disturbing because most alternative treatments have not been scientifically validated and those that have been rigorously tested have been overwhelmingly been found to be ineffective.

"They are either unproven or disproven," said Wallace Sampson, founding editor of the journal the Scientific Review of Alternative Medicine. "Acupuncture is a placebo. Homeopathy is one step above fraud. It goes on and on. The fact that they are so widely used is evidence for how gullible large segments of our society are."

Now we get to sensible people. That one step homeopathy is above fraud: The practitioners are often just as gullible about it as the people they sell to.

Some went further, noting that some studies have found some dietary supplements might increase that risk of some serious health problems, including cancer. Parents could be putting their children at risk if they deny them proven mainstream treatments, they said.

If I recall correctly, vitamin B12 is carcinogenic in megadoses. And of course, many parents are indeed putting their children at risk.

"In addition to the fact that these things are unproven and potentially dangerous, they also feed the mentality that you can forgo proven treatments in favor of these magic potions," said Seth Asser, a pediatrician and consultant to Children's Health Care is a Legal Duty (CHILD), a non-profit group that opposes faith healing and other non-traditional medical practices.

The survey comes soon after a flurry of large studies failed to validate the suspected benefits of many "antioxidants" widely used to try to stave off cancer and other diseases. Just this week, two large studies found no evidence taking vitamins E and C and selenium reduces the risk of prostate and other cancers.

I hope those get some people thinking. But I doubt it.

Adults were most likely to use alternative therapies for pain, including back pain, neck pain or joint pain. Women were more likely than men to use them, as were those who are more educated and more affluent.

I know us atheists like to brag that statistically, we tend to cover much of the educated sector, but this goes to show that having degrees doesn't necessarily prevent someone from being stupid at times.

"There are hundreds if not thousands of therapies that the public is using. The National Institutes of Health is slowly going through that cornucopia to study them and provide information to the public," Nahin said.

Critics charged that the survey was being used to justify continued government spending on research into such treatments.

I'm torn on the issue, sometimes. You don't want tax money wasted on stuff the promoters won't even try to research properly, but having a supposedly independent institution debunk them would be nice.

"There's a tremendous amount of money being wasted on this," said Stephen Barrett, who runs quackwatch.org, which monitors false medical claims. "That money could be used to do research on something that has been waiting in line to get money."

Nahin acknowledged there are legitimate concerns about many alternative therapies. Dietary supplements are not regulated as closely as standard medication, leaving them more likely to be contaminated, for example. And some products can also interfere with prescription drugs.

But Nahin said government-funded research into such therapies was useful, citing a federal study that concluded that St. John's Wort was ineffective. After the results were released, use the herbal remedy dropped sharply, he said.

"The research is working," he said. "It's doing what it's supposed to do, which is provide reliable information to the public so they can make decisions."

So, I guess that's why I haven't been seeing as many ads for St. John's Wort. Maybe there's some worth in this.

I'd wager that wealthy people tend to be healthier in general, and thus have more ability to spend money on worthless placebos than the less well-off. It's kind of similar to why most of these people turn to CAM for minor aches, pains, and other stuff that goes away on its own for the most part, but turn to real medicine for the things that matter: terminal illness, birth control, etc.

Meant to continue that thought; sorry. Anyway, when the potential consequences are small, it doesn't matter if the treatment doesn't work. But when the risk is greater, they turn to what has the greatest chance of working.