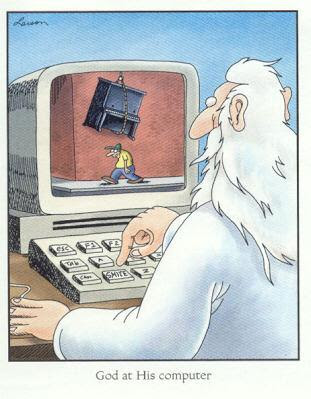 The last entry relevant to this largely dealt with woos using appeals to consequences of normal actions. These alleged consequences typically had no evidence supporting their existence. This entry is largely about woos appealing to the consequences of belief.

The most famous of the appeals to consequences of belief is probably Pascal's Wager, paraphrased as: "If you believe in God and God exists, you'll get infinite reward. If you don't believe in God, and God exists, you'll get infinite punishment. If God doesn't exist, you don't get anything either way." Of course, the problems are myriad: It presumes that God acts on belief, rather than some other criteria. It presumes there's only one kind of God to believe or disbelieve. It presumes God cares. Yadda, yadda, yadda. Most of all, though, it's putting fear and selfishness ahead of curiosity. Follow the link above for more details.

Shouldn't we just study the evidence before reaching conclusions, rather than forming a selfish conclusion and making an appeal to that selfishness? That's what a lot of religious appeals to consequences of belief boil down to: Do this, because we say it's in your best interest, even though we defined the belief in terms of non-evidence-based self-interest.

What separates woo-based arguments like this from the scientific method is the emphasis: Woos highly stress the importance of believing in the conclusion, regardless of how it was arrived at, often exploding if someone dares question how they arrived. Science, unlike woo, emphasizes that method: How we know what we know? Science is willing to overturn its earlier conclusions when better evidence contradicts it. Woo, on the other hand, will generally never do such a thing. Conclusions are sacrosanct, and methods are only good if they agree with the conclusion.

Science, of course, tends toward the philosophy that sacred cow makes the best hamburger. Dissecting the 'holy' bovine will get more accurate answers than fear and egomania.

If Pascal's Wager really works, then combined with a multitude of creeds it provides a proper scientific explanation for Hell's climate.

Are you sure you're not forgetting anything? Check ye group.

Sacred cows may make good hamburgers, but if you really want some good meat, it's spherical cows or bust. I've never personally eaten meat from a sacred spherical cow, but I've heard it's been classified as the most pleasurable way to die.