Doggerel #105: "Who Are You to Criticize Someone's Belief?!" 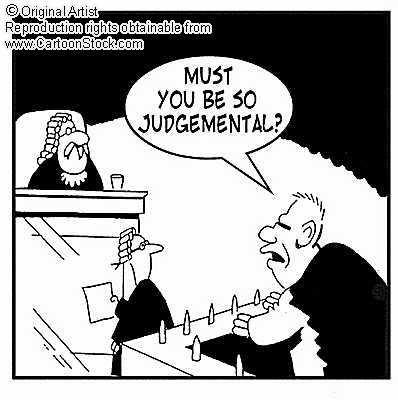 Welcome back to "Doggerel," where I ramble on about about words and phrases that are misused, abused, or just plain meaningless.

This particular bit of doggerel is really infuriating to me. If we were debating something like whether or not some character in a movie was played by one actor or another, we'd simply call up the IMDb or watch the movie and pay attention to the credits. If we failed to find an answer through either of those methods, we could get some photos and voice samples of the relevant actors and compare with the movie. I'm sure we could come up with other methods of figuring out the answer if really hard-pressed. If we got a definitive answer, no one would go on and on about the incorrect person's right to believe he was right, or claim that we, as mere non-Hollywoodians have no right to criticize his alternative cast theory. Yet, for some bizarre reason, those very issues almost always come up with woo.

It's a very strange line in the sand that they draw. The vast majority of these complaints revolve around scientific questions, yet for unspecified reasons, we aren't allowed use the scientific method and critical thinking to find the correct answer: We're expected to just smile and nod when we see obvious flaws in someone's reasoning (or lack thereof) because some questions have been declared, for no meaningful reason, to be sacred cows.

An expression many atheists and skeptics are quite fond of is "sacred cow makes the best hamburger." That summarizes science quite well: Everything is open to criticism. Nothing can be declared unchanging dogma. If you can find good evidence and make valid arguments, anything can be overturned. Ego and tradition are not shields against efforts to correct errors. If you've made errors, you shouldn't try to hide them behind some allegedly impenetrable barrier and declare that your pet hypothesis is sacred ground that no one should intrude on.

Often when I see this one, the person isn't defending their own belief, they're defending someone else's belief. It's particularly strange when they go on in this way, as they're tacitly lying in supporting that you're right, and yet they're saying you shouldn't tell other people they're wrong.

Honestly, I think it's just a tricky way for them to try to get you to shut up. They don't like what you're saying, and the cognitive dissonance it points out in their minds is hurting, so they try to stop you from saying it. Sure, they could just go away, but others are going to read it as well, and those people have to be protected.

I've never heard that quote before, but I'm going to add it to my repertoire, because it's awesome.

As Robert Ingersoll said: The instant we admit a book is too sacred to be doubted, or even reasoned about, we are mental serfs.

BA has been getting a lot of these sort of comments, lately.

I just spent a few minutes pointing out the errors (fallacies?) in one ladies comment.

I guess it's because Phil is a nice guy, with a sense of humor (in a geeky way) that people so often pipe up and say "You've hurt my feelings!"

I know religious people of various backgrounds who feel that "belief in belief" and "faith in faith" are all-important. That is, it doesn't matter what the beliefs are; rather, people should be respected simply because they believe. Of course, that then means criticizing those beliefs amounts to an attack on the person.