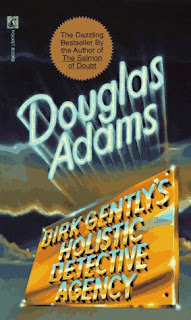 Alties love to claim that their favorite woo "treats the whole person" or similar crap in their advertisements. The most effective criticism I can think of for the typical altie "holistic" treatment: They can't prove that it treats any part of the person.

Of course, moving beyond that obvious angle, alties often don't seem used to explaining how they treat the whole person in a way that real medicine doesn't. Real medicine has to keep track of you. That's why medical records are so important. They have to factor in things like allergies, genetic quirks, and general health to see if you can handle the side effects and such. (Naturally, anything that has an effect pretty much has to have side effects.) I don't see alties doing much on that front. As Eddie Izzard pointed out of chiropractic:

Put simply, I don't see alties doing much to take the whole person into account. They have a habit of just prescribing standard treatments.

One annoying thing that often comes up is that alties often have good bedside manner, which they'll advertise as treating the 'spirit'. Of course, they often have a lower patient load, and often don't have to do much of anything, so it's often easier for them to maintain. Would be nice if some of these people could have the cobwebs in their heads cleared out so that they could go into nursing and put that bedside manner to better use. Having a friendly relationship to the medical staff can often do good in the form of better treatment compliance and stress reduction, but people with illnesses need real medicine to go with the kind gestures.

That would be a great marketing slogan. "Bob's enemas, putting the hole back in holistic care".

Not that it was ever missing.

Any altie who tries the holistic angle is a disgrace. It's not so much a crap statement, it's a gigantic assault on doctors and medicine generally. It essentially says outright that medicine doesn't do this.

And given that the Hippocratic Oath and the Declaration of Geneva both require doctors to consider the overall health of the patient, such an attack is both unwarranted, ignorant and jaw-droppingly brazen.

Once again you've found a good one, BD. And my blood is boiling, so I better have a lie down.