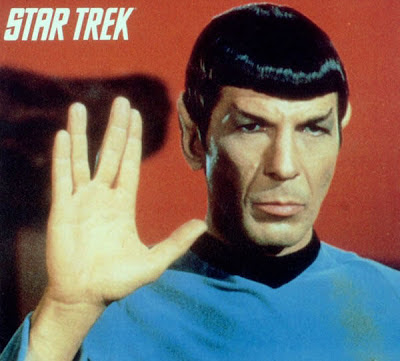 Woos often like to pretend that skeptics all have pointy ears, that we're beyond emotion, etcetera. Especially when we see through appeals to emotion and heartfelt, if misguided warnings. Of course, we're people, too. We're just more consistent than most people.

First, one of the woo abuses of the term implies that logic is something incredibly restrictive, and that their favorite woo is beyond it all. This usually gets into silly special pleading pretty quickly, when they claim that results exist, but they can't be measured. How they measured them is left an open question.

Second, woos will often use fallacies of "logical" people to try to convince us that we shouldn't discount stuff. One of these is the famous Sherlock Holmes quote, "Once you eliminate the impossible, whatever remains, however improbable, must be the truth." That one in particular, as well as many other lines of 'woo logic' tend to be based on a lack of imagination. Holmes's quote relies on the presumption (and hubris) that you know all the possibilities. Usually, the woos in question don't even know what a skeptic's stance is on the issue, and thus can't attack the real lines of logic and assumptions being used.

Third, woos treat logic as if it were somehow antithetical to emotion. Quite frankly, I don't see how. Emotion seems like a natural extension of logic to me. Heck, it forms a large part of my sense of humor: A lot of jokes rely on the listener being able to spot holes in someone's logic, or reversal of expectations arrived at through logic. That must be why I see so few woos with a sense of humor.

Woos also don't ever seem to comprehend what logic really is. They seem to think it is this giant, monolithic set of rules that will always impartially lead to certain conclusions (that they, of course, reject). The don't understand that different premises lead different people to different conclusions, often based on the same input information.

If we tried to explain to them that there really isn't one monlithic "logic," but rather many different sets of rules based on different assumptions, their heads might explode. Woos often seem to inhabit a pre-Godel universe.

For my part, I've tried to stop using the word "logic" in favor of "reason," which is a more widely applicable word and better represents what I actually mean, anyway. This post by MarkCC, I think, really sums it up best.

Yes, this is also a pet annoyance of mine. People I talk to constantly use the word logical to mean reason or rational.

The biggest annoyance for me is when people refer to their 'personal logic' when the really are talking about thier personal set of bias, assumptions, and opinions.

It seems like logic has become this abstract authority figure. Such that if you can convince people that you are using it, then you must be spouting Truth(tm).