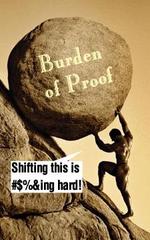 Welcome back to "Doggerel," where I ramble about words and phrases that are misused, abused, or just plain meaningless.

One of the core issues that woos seldom give much thought to in an argument: Who has something to prove? Under the majority of circumstances, it's the woos.

In an argument, you have the advocate, who supports a positive hypothesis, and the critic, who supports the null hypothesis. With the exception of issues like evolution and Holocaust denial, the skeptic plays the role of the critic. When playing the role of the advocate, the skeptic usually does enough by shooting down a woo's fallacious "criticism" of the dominant theories.

To clarify the difference between a positive hypothesis and a null hypothesis, here is an example:

Science works by assuming the null hypothesis until it can be falsified. This works well enough because it's fairly easy to catch errors: For the time being, we assume fairies don't exist. It's easier, since proving the non-existence of fey beings would require searching all of time and space (assuming we could get around their invisibility spells and so forth) and not finding any. This would be a massive waste of resources, especially since we'd have to investigate goblins, demons, Sterrance, and who knows what else.

Assume for the moment fairies do exist. We'd be able to revise our knowledge if one much simpler condition is met: Someone demonstrates one fairy under proper conditions. That would override any negative results from an unnecessary search of the universe. And that's what makes science great: It's easier to prove something with one simple demonstration, rather than a universe-spanning refutation. The woos would have it easy if anything they believed in existed.

Hopefully, that covers the whole "Burden of proof" issue. Some woos, however, use the phrase in a much more trollish way: They claim that they're posting or commenting or whatever, but not to prove what they're talking about. That attitude is more appropriate for polls, not debate forums. It's essentially an admission that the troll has no intention of discussing the issue, and usually when we try, the vitrol flies.

In some cases, they argue that psychics, astrologers and such have no need to prove their powers, despite taking money from their victims. This is an attitude that openly promotes fraud: A person selling his services must be able to demonstrate there is value in those services. Anyone who argues to the contrary must be as morally bankrupt as Sandy and Jambo.

A while back I wrote a post about the null hypothesis: The Church of the Null Hypothesis. There's a particularly good comment at the end from Nick Barrowman, a professional statistician who blogs at Log base 2.

Great post. When I get my brain into order, I will reference this on my blog. Good work dude.