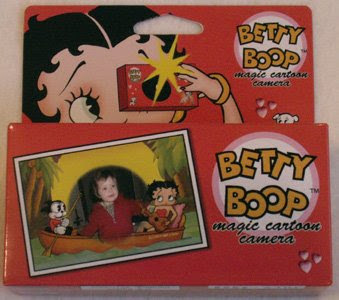 This entry is a bit unusual in that it's a phrase woos won't say it outright in those words, but it does seem to be a popular sentiment to put between the lines. Cameras are wonderful things. They let us record images from a particular moment and allow us to metaphorically return to that time. But to a woo, a camera is more than that. In a lot of fantasy entertainment, it's popular to have mystical creatures and such not show up on camera. In the woo world, it's popular to have the reverse: Magic shows up because of the camera.

It reminds me of a spam message I got a while back for some spray that would allegedly make the user's license plate unreadable on camera. I wondered if it was opaque spray paint, but no: They expected me to believe it was some magic substance that would scatter light for cameras but not for human eyes. Cameras aren't all that special because they work on the same principles as eyes: Light goes in, is focused by a lens, gets flipped over in the process, and the image shines on sensitive receivers. A camera is a mechanical eye. It may rely on different chemicals or on electrical signals than the human eye, but it's the same fundamental process.

If you can fool the eye, you can fool the camera. Cameras are just more reliable overall because they leave harder memories, but they can still be tricked. That's why you've got "orbs," "rods," and camera straps showing up a lot. Those things get significant when you throw in things like shutter speed, focal distance, and lack of binocular depth perception. Organic eyes have their troubles, but so do mechanical cameras, especially since squishy organic eyes often have compensating software behind them we take for granted, constantly adjusting two eyes to get a better look, and cultural software to make shortcuts in interpreting the resulting images. Cameras don't have that mixed blessing.

Another sentiment popular among woos, especially twoofers from what I've seen, is that photographic evidence trumps everything, and that visual interpretation of grainy images is superior to all other forms of evidence, or that unlikely interpretations outweigh gross logical failings of that interpretation.

Cameras are wonderful, but they aren't infallible. Never put blind trust in any one piece of evidence.

Yeah that's always been weird, but this goes back to the mystical ideas behind mirrors and their relation to vampires.

This may be related to the ideas on "natural" vs "unnatural man-made". Of course to me all man-made things are natural by their very nature, and for something to be unnatural it would have to be Cthulu or something.

The camera can be fooled, as you said, but there's one other thing to point out. The camera does have that "mixed blessing" software, in the sense that a person looking at a picture taken by a camera is using the same image interpretation parts of their brain as when they look at anything else. It's why someone can look at a bunch of pixels in JPEG images and see a city.

The license plate sprays that I've seen advertised contain small reflective particles. The idea is that light from the cameras flash will be reflected back to the camera and the excessive light will obscure the license plate.

I think it would be similar to regular traffic signs. They have reflective stuff in the paint to make them more visible at night.

Here in Australia it is an offense to tamper with your license plate in any way. For a while plastic covers were popular for the same reason. The shiny plastic supposedly meant that the camera wouldn't be able to get a snap of your plate.

I love that people will spend money on that sort of crap instead of just driving in a safe and responsible manner.

Yeah. I've met a few people who complain about how they're running low on money and about growing traffic tickets in the same breath.

"Maybe if you're getting speeding tickets, maybe you should try driving the speed limit."

The idea is that light from the cameras flash will be reflected back to the camera and the excessive light will obscure the license plate.

Sure. Only one problem - it doesn't work.

Flit: I've got a valid reason to put a plastic cover on my license plate. Would you believe that there are lowlifes in this town who steal renewal stickers? [/Max Smart] Okay, the phrasing was humorous, but the theft of stickers is real. For a while, the state was issuing renewal stickers that went inside the rear window because of this. They gave that up when they apparently couldn't come up with an adhesive that would hold for a full year (why they didn't use the same adhesive as the state inspection/emissions test stickers is beyond me).

As far as reflective particles go, in some states, they seem to use reflective paint on the plate numbers, presumably so the numbers will show up better on camera.

Dunc, that wouldn't suprise me one bit. There is no shortage of dodgy products aimed at motorists. Fuel additives, radar detectors, devices purported to scare away kangaroos. It's a good market to target for scams because there are so many car owners out there.

Rhoadan, there have been a spate of licence plate thefts in my area recently. It has become so common that the police are handing out one way screws in an attempt to deter theives. It's annoying that we have to go to extra effort, using special screws, or fitting plastic covers because of the behaviour of other people. That's the world we live in though.