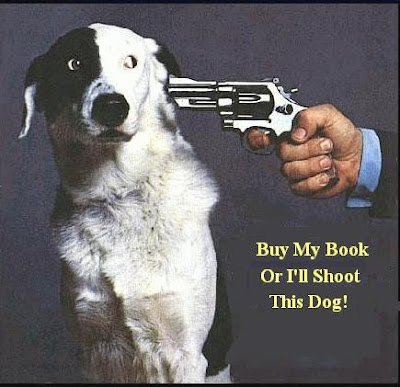 One tactic that never fails to impress other woos is writing a book. "Anyone who can fill several pages of text must be smart!" seems to be the general sentiment. The problem is that there are lots of publishers who aren't into intellectual content. Just because you can get published doesn't mean there's anything impressive in your writing.

Another aspect to the doggerel is that it's a stalling tactic. If you have a revolutionary argument that will change the world, you should present it as often and as soon as reasonably possible. Using this tactic allows the woo to appear to be responding to criticisms, but it doesn't entail any work on his part. Chances are, in the book, he won't address the questions raised, if it ever gets published, and if he won't even give a glimmer of his arguments, why should we bother looking at the book?

It also entails a bit of marketing: Often, people who disagree with you may buy a book just to verify that it's as stupid as they presume. They may be marketing to other woos in the comment threads. Either way, word gets out about the book, leading to a chance of profit. And they have a habit of saying us skeptics are shills.

George Shollenberger is a prime example of this.

Unlike others, I dare to share the plain truth of the Bible and history within Beyond Babylon: Europe's Rise and Fall and upfront throughout the internet world, as many can testify.

Perhaps you can provide a few examples of your claims and the evidence for them, if you're going to be sticking around.

If David's all right with it, it looks like Beyond Babylon is available here. I've only just started reading, so I've just got my initial impressions that the Pope is supposed to take over the EU and commit genocide against EVERYBODY, which the US, the UK, and Israel survive via divine intervention.

Is that about right?

The German-dominated Europe, under heavy influence of the Vatican, will morph into the final revival of the unholy Roman Empire of the German Nation. Even secular folk, with no religious agenda, notice this fact.

This unholy alliance of Catholic Church and German state will wreak havoc on the British-Israelites and Jews, primarily, and unless there is divine intervention, we'll all be so much nuclear dust in the wind...

Beyond Babylon is available here. Thank you MWchase for sharing that information. I need to update it, a few modifications (new pope), but so many forums, so little time! :-)

You're welcome. (Understand that, according to my latest round of skimming, I'm like, one of your sworn enemies or something, but whatever.)

Before I say anything else, though, I have to get something off my chest: PublishAmerica? Really? Anyway.

In broad terms, you're saying that the moral fiber of America (And Britain. Does Australia get included too, by the by?) was eroded when the Anglo-Saxon descendants of the tribes of Israel turned away from the teachings of God/the Bible and toward materialism and short-term happiness. AIDS is somehow a metaphor for this, or a physical manifestation...

How off was that?

Beyond Babylon decries the idolatry and immorality, physically and spiritually, of the British-Israelites and Jews - and yes, British-Israelites includes Aussies and Kiwis too! - and compares it to a form of spiritual AIDS, our countries' weakened immune system, our defenses down, inviting attack. (As an aside, I have AIDS now)./

Before Publish America published Beyond Babylon, my friend Carl Brown (fellow Bible believer) and I did everything ourselves from my typing and writing, copying the pages at Kinkos, cutting them, ordering nice covers and then putting it all together, time consuming and expensive, a hard labor of love, which, including postage, brought it to around $6-$7 per book to mail (if I remember correctly and more when mailed overseas), which we did freely to many, as funds were available and donations offered (thank you, to those who blessed us with financial and prayerful assistance), making the most of what we had, doing our best to get the Word out, trusting if we're faithful with the little we had, in God's good time He would increasingly bless us with more and helpers, co-workers.

Before that I simply printed out and mailed out the pages of Beyond Babylon, then someone suggested making it available online when I didn't have a clue about the internet, but found out quickly and spent around $150 a month using AOL, Prodigy, CompuServe and others, always moving forward, expanding my horizons, reaching out in every way possible, slowly but surely, but never giving up.

Publish America was the first to say yes to BB. Of course I would prefer some big name publisher, with great royalties and advance payment, great publicity and such, but God usually doesn't work that way, does He? After all His Son was born in a barn, in a manger, not the Marriot or Hilton or Sheraton, and Herbert W. Armstrong taught that what God does always starts small and seemingly insignificant.

I'm reasonably certain you could get it done with Lulu for nothing, if you haven't already. I'm ready to finish my tangent for now. Onto your points...

More skimming has revealed that only faith in God can save people at ground zero of a nuclear attack, and protect them from the effects of fallout.

I missed this before, but: Catholicism is not 'true' Christianity, and I think you're saying that it's a tool of Satan. Wait... going by my second-hand knowledge of dispensationalism, were you predicting the pope would be the anti-Christ. (I just got to ten kings, and all. So yeah, I'm not kidding about skimming.) Revelation 13:2, yes? "And I saw a beast coming up out of the sea, having ten horns, and seven heads, and on his horns ten diadems, and upon his heads names of blasphemy."

I really should point out more, but I'm getting tired. Physically, mind. I'm not yet tired of this... whatever it is.

"Beyond Babylon decries the idolatry and immorality, physically and spiritually, of the British-Israelites and Jews - and yes, British-Israelites includes Aussies and Kiwis too! - and compares it to a form of spiritual AIDS, our countries' weakened immune system, our defenses down, inviting attack. (As an aside, I have AIDS now)."

I apologize for being an arm-chair psychologist, and please don't take offense at this, but I see more significance in your aside than in your theory per se. Perhaps this metaphor is partly your own way of coming to terms with the hand fate has dealt you, and if so, I understand that. Searching for positive meaning in misfortune is something many people must do at some point in their lives.

I wish you the best, and I hope you're receiving the best medical treatment available.