Crystals are pretty rocks; they are not keys to psychic powers or healing modalities. -James Randi, An Encyclopedia of Claims, Frauds, and Hoaxes of the Occult and Supernatural 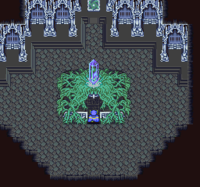 Crystals are what happen when atoms arrange themselves in a regular pattern. In diamonds, each carbon atom covalently bonds with four adjacent carbons in a series of tetrahedrons. In snowflakes, water molecules form hexagonal patterns. The result is usually quite shiny and nifty. Inorganic crystals are often more amendable to forming crystals, but organic crystals like insulin also show up. Some crystals are subject to the piezoelectric effect: Squeeze them, and they'll generate electricity. Electrify them, and they'll distort. Also nifty. Some are also subject to the ferroelectric effect.

Now that I've got the proper term down, here's where the doggerel comes in: Woos like to assign properties to crystals that don't exist, or insert crazy additions to existing features. For instance, the piezoelectric effect pretty much means that a crystal can convert electricity and mechanical energy back and forth. Some woos extend this to claiming, explicitly or implicitly, that some crystals can magically convert known energy into unknown, undetectable magic energy that heals or whatever. If this were the case, we'd just need to carefully examine the crystal under lab conditions to see the energy vanishing.

Crystals are understandably linked with the concept of purity, since they involve a great deal of uniformity in both composition and the bonds between the constituent atoms and ions. Of course, thinking that they'd purify an organic body is more or less going against the grain: Organic life is a messy business, and pretty much the opposite of a crystal.

Crystals make for handy foci in the hands of D&D-type sorcerers, McGuffins for Final Fantasy, and such, but until the woos can demonstrate such utility in the real world, such as passing the Randi Challenge, I'll just consider them pretty rocks.

It's always been hard for me to believe that something a 6-year-old can grow in a bowl of water has such amazing magical and medical capabilities.

Oh boy. Back in the days when I used to travel around the country to see the the Grateful Dead this was one thing that used to crack me up. All those pseudo hippies LOVE the crystals. They wave them around with their burning sage when doing anything. Starting the car - crystal, making grilled cheese - cristal, smokin' a bowl - crystal.

The real magic is to take the brown goo from a reaction, heat it with some organic solvent, then watch as white crystals of pure product drop out. Real science is so much better than woo. I am also content to trace my family to Jamestown, and not back to ancient Egypt when I was Pharoh.

The only "benefit" that crystals have is that they're pretty and shiny. Ooh, shinies.