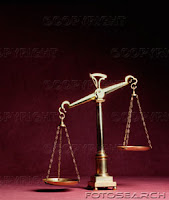 One of the mantras used by those who feign objectivity or don't bother performing journalism by actually researching their topic is "fair and balanced." The big problem I see with that phrase is that it's contradictory: In scientific matters, it's rare for the media to treat both sides in a fair manner. They prefer "balance" so that they can pretend to sit on the fence.

Fairness means treating something according to its merits. Well-established scientific theories should be treated as the most preferred explanations, and crackpot hypotheses without testable predictions or good evidence should go unmentioned in a serious article. The mainstream media often seem to think otherwise.

"Balance" means presenting both sides, whether or not they deserve it. Often, the media will fail to even deliver on this front, as many programs merely present a token skeptic, often edited down to take away anything of substance. If balance is insisted upon, it shouldn't be the journalists doing the editing: It should be the proponents picking out their best arguments.

A likely reason the media maintains false balance and false fairness is ratings: If there's a manufactured controversy, they can continue reporting on it indefinitely. Woos have raised this sort of act to an art.