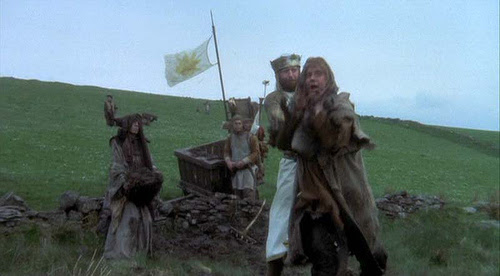 When skeptics criticize woo beliefs, a common complaint is that we're "persecuting" them, as if criticism was a form of persecution. Typically, they turn around and complain that we're closed-minded, shills for the evil atheist conspiracy, or whatever, without evidence. Welcome to Moonside!

Freedom of speech protects my right to say your speech is idiotic. If it didn't, agonybooth.com would be illegal. If I can list many fallacies in a manner that demonstrates the hows and whys of your idiocy, all the better. It's not persecution unless I'm preventing you from speaking, or punishing you for speaking.

One example from the JREF forums was the troll known as Kilik. He would post lots of new threads, fill his posts with lots of pointless images, and would seldom respond to comments. He also employed a lot of copy/paste. I wasn't around at the time, but apparently all his suspensions led to an eventual banning. What did he post about? I mostly recall stuff about Atlantis, pyrimidiocy, and something about Jesus being a martial artist. I agree with the ban. Not because of what he posted about, but because of the uncivilized manner of his posting.

I'm perfectly willing to let people talk about whatever they want, so you won't get any persecution from me, or most any other skeptic, for that matter. But that doesn't mean I'll just smile and nod politely. That attitude is one thing that's destroying society: Woos, the media, and so forth are more interested in the veneer of civility than they are about finding the truth.

Many politicians claiming to be Christian often say they're being persecuted, yet they're currently running the US. When was the last time we had an atheist for President? Lincoln, maybe?

You have the right, as a private citizen, to say "Jesus" and "Merry Christmas" here in the US. That doesn't take away my right to call you an idiot or whatever when you do.

Cries of "oppression" are the most vile because of the number of truly oppressed folks who get lumped into the mix with the crooks and liars by the average person.

the media, and so forth are more interested in the veneer of civility than they are about finding the truth.

Too true. I think you may dig Alon Levy, one the Unscrewers of the Inscrutable. He's got a recent post on Sen Obama's "misguided" (alright, I'm bein' nice) rant against Secular Liberals that I think think falls in line philospohically with this particular Doggerel.

I often view this one as being similar to what I call the Mugabe Defence.

This was where the president of Zimbabwe, Robert Mugabe, after a barrage of criticism over his brutal and corrupt regime decided to play the race card in response.

All criticism was null and void because the rest of the world was "racist", according to Mugabe.

Perhaps an extreme example, but the Mugabe Defence is sadly the worst of this type of red herring.

Practicing my freedom of speech:


You are all a bunch of idiotic monkeys.

Well, you said it. And it's also within my rights to call you a doodie-head for making such a stupid argument.

Glad I'm in America (though it's been registering lower on the Amercanometer, lately), instead of some Soviet gulag for believing in evolution.