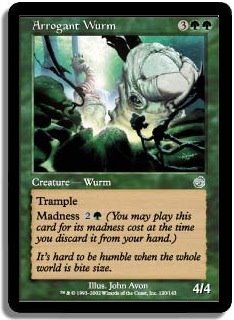 Skeptics are often accused of being "arrogant," as if that changes the facts at hand. Just like the accusation of "jealousy," it's an evasion of the arguments. Facts are facts, regardless of the emotional state of the person who says them.

Often, the complaint comes from pseudo-moderates when we mention the weakness of the opposing side's arguments. It's not arrogant to favor the side that has the most (or even all) evidence going for it.

In fact, the woos are more often the arrogant ones:

Their arguments often rely on the assumption that all the existing scientific data is wrong, and/or incorrectly obtained.

They often post one "magic argument" that they seem to think we've never addressed. This is especially true in Creationism. When the flaws in the argument are addressed, they usually ignore such responses, pretending they've debunked skepticism.

The woos often seem to think that they're in on some secret, and that it's because they're smarter than any of us. The same can often be said for skepticism, but at least we have demonstrable progress, unlike them.

They often claim that they have a special way of knowing that doesn't have to actually demonstrate its effectiveness.

Another common variation is a claim that our "arrogance" will distract people from our arguments. Such a claim is, however, is often a deliberate attempt to distract. An additional problem with this is that, these days, any statement of knowledge that disagrees with a woo is "arrogant." Uncompromising honesty has become a sin. We shouldn't have to patronize them by inserting faux respect into our writing.

Doggerel Index
Posted by Bronze Dog at 8:13 AM

Loving the Doggerel. Keep it up.

I haven't read through the index of Creationism... as much as I wanted to...

I just wondered what evidence you would like to suggest disproves the claims made, for example by Creationism... actually rather then just having to defend other people's ramblings, maybe you'd just like to start with the things that I state in mine... or maybe for some real hardcore debate come over to exilefromgroggs.blogspot.com for a bit.

In reltaion to your post however, I'd just like to say, something that I've noted recently, is that Creationists are often seen as being arrogant... as they are the skeptics more and more these days in relation to what the state teaches in the schools as fact, despite more and more bona fide scientist writings papers on the lack of proof for evolution etc...

basically what I'm trying to get at is I'm not smarter then you... in fact I'm probably a lot dumber... which is probably why evolution doesn't add up to me...

On e particular problem I have is that evolution would suggest that Ken Dodd is the result of millions of years of survival of the fittest, and conditioning...but I'm sorry... is, how shall I say, unconvincing?

1. ID/Creationism is unfalsifiable as is: Anything can be twisted around to support them. They can explain anything, therefore they explain nothing. It's like saying "It's magic!" for how a lightbulb works.

2. Last time I checked, evolution had lots and lots of evidence, and no one's writing anything worthwhile about any alleged lack of proof. Evolution works well enough that it's been put to practical use. Adrian Thompson "designed" a microchip via evolutionary algorithms that was a lot simpler than previously thought possible for its function. (Only 37 logic gates, and no clock) Last time I checked, they still hadn't figured out how the chip works, demonstrating that unintelligent evolution can be surprisingly clever.

3. Don't know anything about Ken Dodd, but some possible hypotheses/explanations:

A) He got lucky. Natural selection is probabilistic, not absolute.

B) "Fittest" doesn't mean what a lot of people think it means: If you can survive long enough to have offspring, you're fit. If you have more successful offspring than others, you're the fittest. Fitness is about passing on DNA, not any human ideals about what traits are "best" (Such as strength, speed, etcetera).

C) His parents were fit, but he isn't. This one depends on whether or not he's had kids.

4) Creationists typically have to reject a lot of chemistry, physics, etcetera to support their claims. For instance, many claim that radioactive decay rates variable. There's a guy in Ft. Lauderdale, Florida who'll give them a million dollars if they can prove it.