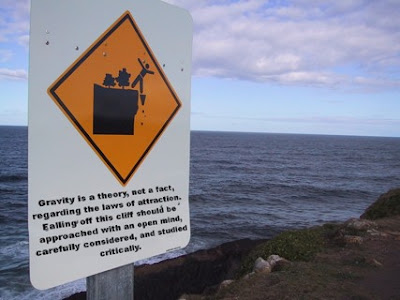 "Theory" is a word that common usage has been butchering, lately. When you have an explanation for some events that can lead to predictions, you have a hypothesis. If your hypothesis has lots of good evidence supporting it, then it becomes a theory. Evolution, the Big Bang, gravity, thermodynamics, relativity, and all that good stuff qualify.

Common usage, however, places "theory" at the level of any crackpottery, or vice versa. Intelligent Design, for example, is not a theory. It's not even a hypothesis: It doesn't explain anything, nor does it make predictions.

Evolution, on the other hand, can make predictions accurately enough for use in practical applications. Just ask Dr. Adrian Thompson about his voice recognition chip.

The Big Bang predicted a uniform background of microwave radiation. We found it.

If you want to overturn an existing theory, you have to come up with a theory that makes even more accurate predictions (Like relativity did to Newtonian physics, though they're still accurate enough to remain useful for our low-speed purposes) and accounts for the existing data.

Of course, your hypothesis has to be falsifiable. ID doesn't explain anything because it could be used to explain everything: Design flaws are attributed to imperfections, higher purposes we can't comprehend, etcetera. Anything to excuse the designer from all the monkey wrenches that end up in our internal works.

Psychic hypotheses often fall into this trap, too: Successes are explained by nebulous powers, and failures are explained with equally nebulous forms of interference that usually can't be detected until after the failure.

Scientific theories have done a gosh-darn good job explaining the world and making our lives easier (sometimes). I'm not going to pretend they're at the same level as some random net kook's repeatedly ad hocked ravings.

Ooh, great choice of a picture! Couldn't have done it better myself.

Of course, I was borrowing it. Click on the image to see more stuff.