If You're Wondering How He Eats and Breathes... 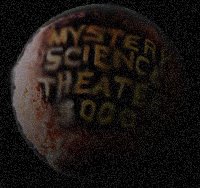 ...And other science facts,
Just repeat to yourself "It's just a show,
I should really just relax
For Mystery Science Theater 3000."

Was watching the latter half of an episode of Star Trek: TNG: "When the Bough Breaks" It was one of the early episodes, so I suppose some things can be forgiven, but I noticed a gaping plot hole that undermines the whole premise of the episode: It features a planet called Aldea populated by artsy people who set up their society so that machines would take care of the mundane, non-artsy details in life. They've got the super-technology more fitting for the helpless-except-for-guile Federation from the days of yore, when every alien race out there was hundreds of millions of years old and ultra-powerful, except for possibly the Big Mistake they made so that Kirk would have something to throw red shirts at and make logs about.

Where was I? Oh, yeah: Aldea has a cloaking device. A monster one that hides the whole planet. Kept it in the realm of legend alongside Atlantis and all that until they revealed themselves to the Enterprise.

PROBLEM: Yeah, you can make the planet invisible in terms of electromagnetism... But what about gravity? If I recall correctly, Neptune was discovered in part thanks to its gravity influencing the orbit of Uranus. (Stop sniggering!) Wouldn't a Star Trek-quality ship with advanced sensors and computers be able to notice the invisible planet, cloaked or not?

Oh well. It's just a show, I really should just relax.
Posted by Bronze Dog at 8:07 PM

They didn't see it because a sneaky Sith erased it from the Temple Archives. Obviously.

Did they find the planet with the help of a small child in a silly helmet?

Well, they'd need to be taking observations over a fairly decent period of time for the small deflection caused by a planet to register. Thus, it's vaguely plausible that they'd miss it.